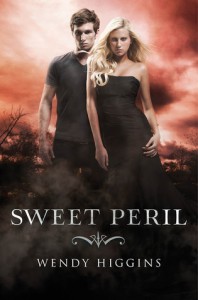 I'd been waiting for this one for a while it's the sequel to Sweet Evil. Anna is half demon half angel her job is supposed to be leading people into a life of drug abuse but her dad isn't like the other big bad demons,he actually loves his daughter and doesn't force her to work. When a ghost appears and informs Anna of a prophecy in which she rids the world of demons Anna with help from her dad and friends sets out to build an army of allied nephilim. Things get heated when she reunites with Kaidan, the boy she's in love with. Too bad Kaidan is the son of lust making him nephililm and two nephs are not permitted to fall in love on penalty of death.

this was my favorite part:

" Through the shuffle of noise I heard a voice that made my ears perk up. “Anna!” I hiccuped again, and froze at the sound of that English accent. My head whipped around. My body clenched—if he was really here something had to be wrong. The hanky fell to my lap at the sight of Kaidan jogging up the middle of the terminal, stopping at the end of our row of chairs. Holy crap . . . my legs went numb. People halted their shuffling at the presence of this disheveled young man with wild blue eyes. He stood there, hair falling in his face, staring at me with a bizarre expression of euphoria. All eyes went from him to me and back again. A wide path was cleared down the aisle. “What’s wrong?” I asked. I knew I should stand but it was like my body had gone into shock I—Nothing.” He peered around the area, harried, as if scouting for possible danger. “How did you get through security?” I asked. “I bought a ticket.” He looked out of his element and more handsome than ever in his board shorts, dirty T-shirt, and flip-flops. Just as I’d left him. “You . . . you’re going on this flight?” I was so confused No,” he said, “but those buggers wouldn’t page you. And your phone is off.”"

This was an exciting read with heartbreak and victory I just love Kaidan and Anna and I can't wait for the next book.
Tweet