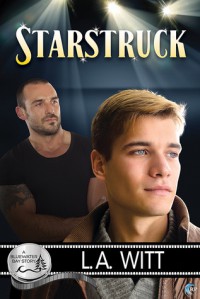 I just blazed through this it was so good!

Levi hates Hollywood, he ran away to Washington to escape Hollywood and now here they are, invading his little town and hassling him to come back to acting and even though he swore he'd never go back they're dangling his dream role in front of him, the role he's been dreaming of since he first started acting. He doesn't know how to refuse and when he sees the lead actor he doesn't know if he should.

Carter has admired Levi forever, in fact, he's the reason Carter started acting in the first place and the one that made him realize that he was gay, yea, he may have a slight crush. When he finally meets Levi in person the whole don't meet your heroes thing doesn't stand up. Bonding over their mutual love of indie films the two become close friends but It's hard to stay just friends with them both lusting after each other and they can't be anything more because Levi is so deep in the closet he doesn't want anyone to know they even talk away from the camera and Carter will be no one's dirty secret.

I really loved this book Carter is great I love how brave he is to be out and openly gay in such a cutthroat industry. I'm upset with Levi, upset that it takes him so damn long to figure out how to live for himself instead hiding his self in order to keep others happy worst is that he's trying to keep happy the parents that disapprove of him and the industry who couldn't care less about him. Throughout the book I just wanted to throttle him and make him see the light, the glorious light outside of those closet doors. Seriously though, I'm definitely looking forward to more of this series. Thanks Netgalley for the ARC.