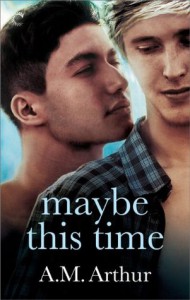 Donner's been living with his sister and her husband since he watched his partner get killed two years ago. Working as a bartender nights he meets Ezra, a well known man-slut who's flirting he doesn't take seriously.

Ezra is traumatized from his parents attempt to "fix" him of his homosexuality when he was younger and is therefore scared to give up control in any manner. Finding new bed mates each night to make up for the emptiness inside he sets his sights on the cute bartender.

Somehow a one night stand becomes what seems to be a (gasp) relationship. Ezra doesn't do relationships and Donner's too scared to give it another go can they somehow make it work?

This book's pretty good! I loved Ezra and Donner, Ezra I feel bad for. I hate that he went through what he did and didn't get the love he should have from his parents but he survives and finds the love he deserves with Donner who is an amazing guy. Donner feeds the poor voluntarily and is just full of love and acceptance. Seriously Donner is amazing I love him.

This is the sequel to no such thing and we do get a lil' guest appearances from Ale' and Jaime so, yay! And I hear talk of a third book so excitement there!
Tweet