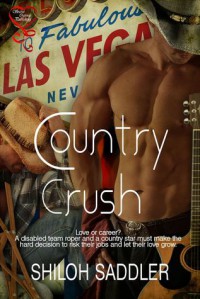 I was given this book for an honest review.

I love Country and Rodeo so that's what I really liked about this story. Blake is a Championship team roper which is this:

He would be the one on the right roping the head while his heeler, the second guy, ropes the back legs it's all really cool. Even more impressive is the fact that he does this even after an accident left his left leg paralyzed. He's been having a hard time adjusting to not having use of both legs and having to rely on crutches and a wheelchair it's also affected his relationships which is how he ends up on the website that matches him up with Will.

Will is a country singer, super famous and in the closet he turns to a one night stand finding website where he meets Blake and now after months of texts and calls he arranges for Blake to come and meet him IRL and because he never did tell Blake who he really is Blake sure is shocked when they come face to face for the first time. Their Chemistry is intense and what was meant to be a one night thing may end up being much more.

The story was too short in my opinion it would have been better if it were longer so there'd be more background knowledge on both their careers and how they came to this point in their lives.
Tweet