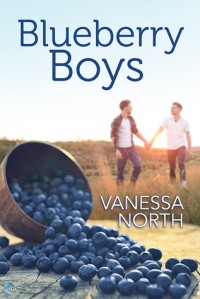 I love blueberries they're my favorite berry!

Thanks for the ARC Netgalley <3<br/>
Years ago Connor finally escaped the nightmare of his town and made a life for himself as a top notch photographer in New York but now he's back in town for his uncle's funeral and though he plans to sell the family's blueberry farm he pauses when he meets the beautiful tenant, Jedediah.

Jed's stuck in a closet hiding from the closed mindedness of his town and family but meeting the man who holds his future in his hands and sees through his stutter may be worth the heartbreak.

Though there's mutual attraction between them the impending selling of the blueberry farm that's Jed's life stands in between Jed and Connor's happiness. Trying for a long distance relationship is difficult and unlikely to work unless they can somehow meet in the middle.

In a town where the preacher preaches like it's the 1950's change is hard to come by.

I rather enjoyed this book it's full of my favorite fruit! I liked Jed he has such a passion for his work and hides who he is in fear of losing his family and friends. Jed's never known real love and then Connor comes to town and even though their relationship is difficult as is their situation he's finally happy. Connor is pretty cool too even though his only family hates him he doesn't let that break him and comes to reconcile with his once hated hometown for the love of the shy stuttering blueberry farmer.
Tweet